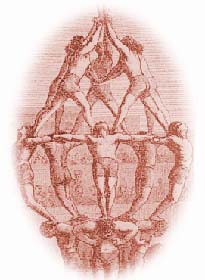 They were exercises of adroitness, agility and balance. A planking was set on some barrels, if the game is played on land, or on two flatboats, if it is played on the water. On such an unstable socket, the athletes had to form human pyramids, reaching sometimes the height of 8 men.

At the base stood 10 to 12 men, called saorna or ballast, the "porteurs" of modern circuses, which joined each other by carrying wooden poles on their shoulders. A child, called cimiereto, then climbed on top to cut a caper or to perform handsprings (tombolo or impalo).

The pyramids were figurative or allegorical. The most famous and remembered are the following: Il Colosso di Rodi (The Colossus of Rhodes), La Cassa di Maometto (Mohammed’s Case), La Bella Venezia (Beautiful Venice), L’Unione (The Union), La Verginella (The Little Virgin), La Gloria (The Glory), and La Fama (The Fame).